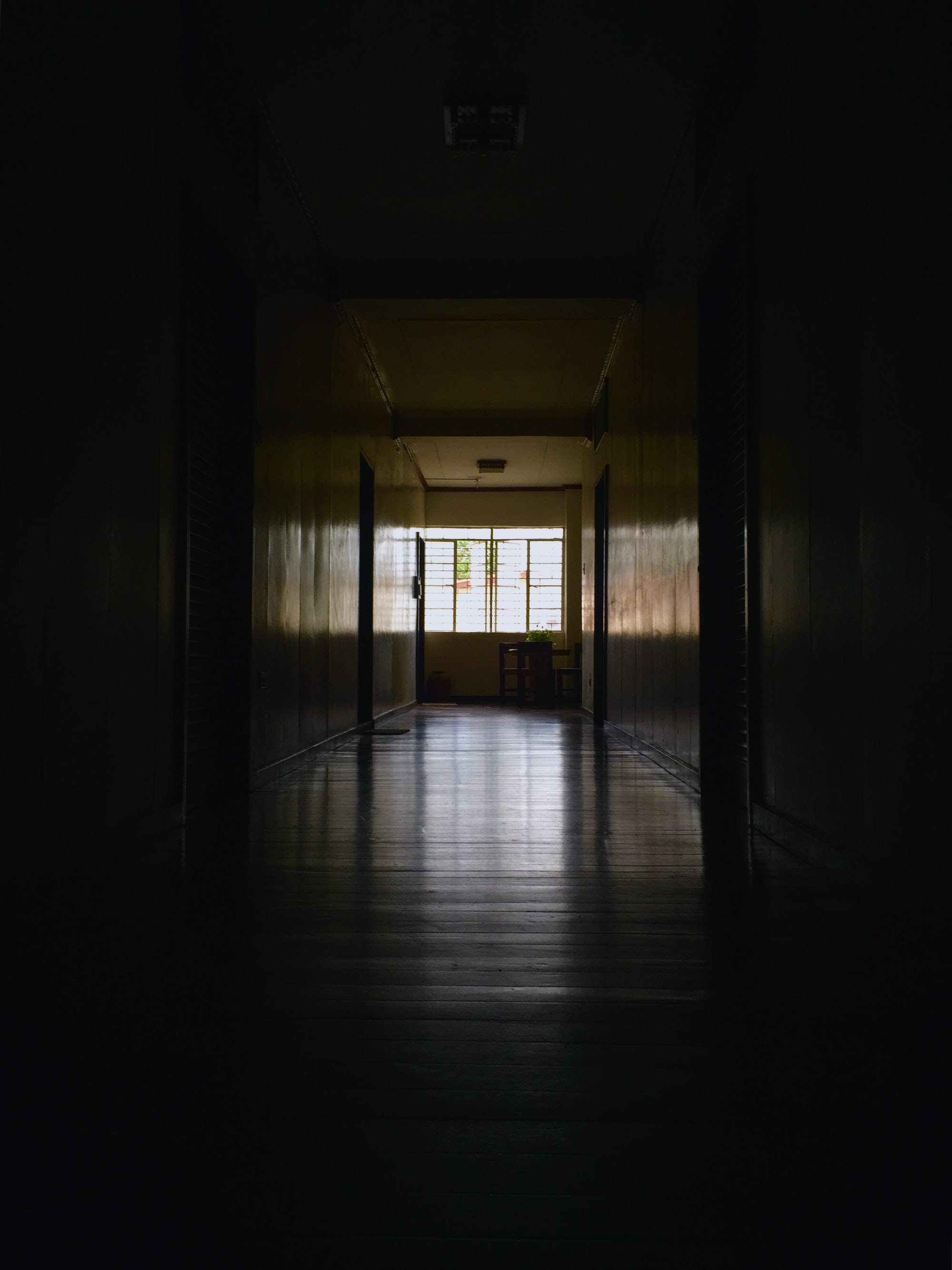 Anger is a flame that will incinerate the holder, should it be left unchecked.

Michelle Obama is an ape who wipes her shit with her hand, he says, at Easter Dinner in 2019. His older brother chortles, unable to contain himself, slapping his knee. Their mother is aghast and goes off at how disappointed she is in them and says some rare, choice words. Their father, whom will die in a year or so, doesn't really react. I don't even know if he heard it.

I look to my daughter, just in the first few months of her life back then. She doesn't know what's happening, and that's good.

I look to my wife, and she is less aghast, and more mad. The brothers are so certain that they're right, and they continue to egg each other on. I don't really recognize them, because for the first time I can peer above the rose colored glasses, and that allows for me see to clearly and without the hue of familial loyalty. The excuses I made to keep the cognitive dissonance at bay are suddenly dispelled as I look at my wife and daughter; both of them are Mexican-American women.

They don't pass the litmus test of people like the brothers.

Neither of them were welcomed at that table, even though they were invited. Invited, because they were the exception, of course; they married or were born into the family, as if it was a gift unto them to be allowed to be at that table.

Over the next few months, I kept reviewing my whole life without the mirage.

Towel-heads. That's what the younger brother would call them, to the nodding agreement of the older one. I made excuses. The older one was between the Twin Towers as they were hit, and escaped by a strange and magnificent stroke of fortune. Lots of people in New York said that slur. They were angry.

How could you not be, back then? But back then became always, unless there was a Muslim American in the room, of course.

Back then, the older brother once recounted to me, the cops were allowed to just take someone into the woods and kick their ass. It was better that way, he assured me. Now, what do you expect? They have a hard job and they're not allowed to use force, and sometimes people just need a beating.

Eric Garner was a criminal, after all. He shouldn't have resisted arrest. Why would he resist, if he wasn't a crook?

I wasn't allowed to be an atheist, according to the older one.

I told his father I was an atheist about a year prior to that, more or less. It's one of my most clear memories from my teenage years. I had been helping him take down the old 1970's wood paneling from his living and informal dining room and replace it with sheet-rock so they could brighten the place up. School had just started that year, and it was warm for September still.

We had stopped for lunch, eating on his deck that a few years prior all of us had put in together. Tuna salad on boats of romaine and chips, this time. I told him that I was having some trouble understanding some things, and he told me that was okay. Then I told him that I was an atheist, and that the whole lot of it didn't really resonate with me.

There was no dramatic pause, no figuring out what to say. There was simply, "Well that's fine, there's all sorts of people", and then offered me more tuna salad. And that was that. A few months or so later when the older brother confronted me about it, it was a different story.

I suppose no one can think differently, either.

My boys went to private university, the older one would proudly proclaim. They paid their loans back all by themselves; that's why student loan forgiveness shouldn't happen.

When I protested that I didn't think people should have to work two jobs for years, as I had, to quickly pay off debt before interest strangled them, I was met with jeers. We were just, you know, better than those other people. If someone wanted to succeed, they should take on that risk.

Who was going to cosign someone's loans, if they were smarter than me, but their parents less wealthy? Doesn't really matter, they're not the problem for him to worry about.

Every family is the same, the older one swore to me on the phone once. We hadn't seen each other in nearly a year at that point. Open your eyes, the problems here are there, too! They're the same!

It was the flailing of a drowning man, trying to convince me that just because a jelly fish may lurk closer to the beach that it's just the same as the shark infested waters I was fiercely trying to swim from. When you have no way to draw someone back, I suppose, it's best to try and simply push them away from where they're going in a last ditch effort.

The older brother claimed that he would vote for Biden, supposedly, if Kamala Harris wasn't a trashy woman who slept her way up the ladder. If Biden wins, he'll be dead by the end of the year, he rationalized. He mispronounces Biden and Kamala on purpose, in the same way he'd emphasize Barak Hussein Obama, when he was the president; to remind people that he wasn't white. I've never heard him say Donald John Trump.

It's okay though, that the person he supports, donning his t-shirts and hats to belong to his club, was a flagrant racist who cheated on his wife while she was pregnant. It's bad, because she's a woman, I suppose, and she had a relationship some thirty years ago with someone while they were both in the same general field.

What do you mean, you won't be staying here? You have to stay here with us, we're family. The baby won't bother us.

Did he not realize that we're not comfortable around them? That a childhood of being told we make too much noise and to never bother his sleep, to snide comments being made if we used the bathroom at night, would make us uncomfortable to bring a crying child there?

Beyond that... what relationship did we have with the older brother that would make us comfortable with that? I had to beg him to come help me, and would later hear about how he helped me that one time, anyways. Help was paid for by guilt later, apparently.

Family helps family, he'd swear. But I suppose he never swore that they'd be understanding or empathetic. I rarely asked for help, and I made the mistake of asking my little brother to take a drive and grab my dog so my wife and I could take our daughter to see her other family.

So the older brother invited himself over as well, after preventing my own younger brother from helping me alone. And then when I wouldn't wake my daughter, who wasn't well, and wasn't getting better, because she hadn't slept in 10 hours and finally fell asleep on the swing, he complained and bemoaned how unfair it was to him.

Unfair to him, but not the 3 or 4 month old that couldn't eat, that we were still trying to get the right medicine for. Unfair to him, of course.

I wonder why I didn't feel comfortable asking him for help.

You have to lose weight, you guys are too big, he said. You have to this year, he said, as he dropped us off for college one year.

Now that I've taken my nutrition into my own hands and have lost 120lb, I wonder why they always gave us so much food. Why they never tried anything except the minimal to make sure their kids were healthy, let them get swallowed up into a depressive hole, and then told them to fix it.

I wonder why the only celebration and fun thing was food, and how that may have led me to have issues eating to this day. Some times, I can't eat in front of other people. Even people I'm comfortable with. I spent 2 years with coworkers at a prior job and only ate in front of them a few times, because I ate so much growing up that I can't stomach my own self.

When I meet my new coworkers after Covid is over, will I be able to have lunch with them? Or will I starve myself until my chest goes numb, subsiding on coffee and water, and then when I'm alone in a hotel room gorge myself to make up for the calories I skipped out on that day?

What does it matter, really?

I don't talk much to the older brother anymore. He wonders why, because he wants to see his family. They're good people – they helped us when we needed help, once, and then never let that go.

Maybe if I cut him a check he'd be happy. My brothers lived with him for a long time, so I know financially I'm still the cheapest one. But maybe he needs that check to feel like he can stop lording it over me.

Perhaps that would do it.

Those are the memories I have with the older brother. I don't remember one-on-one times with him. We didn't have very many of those.

And I wonder why we have no relationship. I realize, it's because we never did. It was a transaction.

Sometimes at night when the house is deafeningly still, I wonder if in another world I would have turned into the older brother. My prayer for peace is left chronically unanswered; my ruminations are the cross that which I bear.

On those nights I strain my ears and I hear the creaking of the floor echoing down the hallway and still, to this day, I freeze.